Inflatable and Ride On Costumes

Inflatable and Ride On Costumes

Inflatable costumes have made waves in the costume world, with more and more people joining the fun and getting themselves inflatable costumes. Perfect for a party, trick-or-treating, or even a mascot, these costumes make great last-minute ideas, and can last for about four hours!   See More Dress Up Ideas 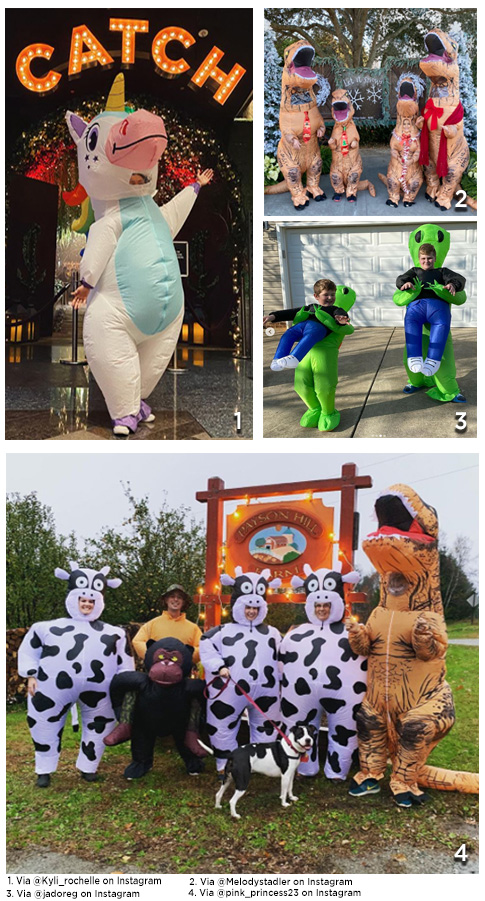 Inflatable costumes and Ride on costumes

Look out! There's a warrior on a dragon, Santa Claus on his reindeer, a beautiful girl on a unicorn or even a man riding a leprechaun! What is going on you ask? It's called Ride Ons! You choose your mount and wear it. It's a special Halloween costume so that you can live your fantasy of riding a bull, a dragon, a dinosaur, anything you want you can ride it with Ride On Costumes! At Oya Costumes Canada we've started to collect as many Ride On Costumes as we can. Some of our favorites include: riding a unicorn, riding a dragon, like a cowboy or riding on your own buddy for Oktoberfest! Do you want a costume like a Ride On that's inflatable but instead you want to become a creature, a character or a person? Well we also have Inflatable costumes too! These are super fun costumes that you wear all over your body, not just your lower body. It's kind of like being inside a balloon, it's super comfy and super fun to run around in. What's great is it also allows you to grow to larger size without actually growing! At Oya Costumes Canada we also have plenty of inflatable costumes to choose from such as our favorites: the infltable t-Rex costume, the BB8 Inflatable Costume, the Inflatable Minion costume and the Michelin Man Marshmallow Inflatable Costume! We even have Inflatable suits to just make you look larger like Inflatable Sumo Suits or a Blue Inflatable Fat Suit. So this Halloween have a lot of fun and take up plenty of space with your on Piggyback Ride On Costumes and Inflatable Costumes! There's no end to the amount of fun and joy you'll bring walking around in your Inflatable costume and Ride Costumes. After all how could you not find someone in an inflatable T-Rex costume hilarious, or a warrior on his dragon amazing?