Greek Goddess costumes are perfect for Greek mythology enthusiasts, but also for anyone looking for a costume embodying strength, beauty, grace, and power. Here are some ideas for inspiration for your Greek Goddess costume! We’ll take a look at different goddesses and learn more about their legends, and why they might be a good inspiration for your costume. Whether you just like Greek myths or you’re heading to a toga party, you’ll love our collection of Greek costumes. 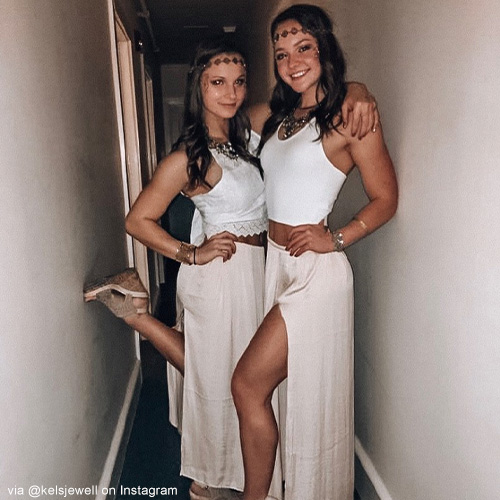 Artemis is the Goddess of the Moon, and the twin sister of Apollo. She is also the Goddess of the hunt and is traditionally represented with a bow and accompanied by a deer. In Roman mythology, she is known as Diane. Like Hestia and Athena, she is one of the maiden goddesses, and as such, she is not married and does not have children. You perhaps know her from the story of Actaeon: the unfortunate prince surprised her as she was bathing in the woods. Furious, Artemis transformed him into a deer, and he was devoured by his own hounds.

Though she, like all the gods, is sometimes represented as cruel, Artemis is an inspiring goddess. Did you know that like Hecate, she is still popular among present-day pagans and wiccans, as she is a moon goddess? If you find her stories fascinating, we’ve got plenty of Greek Goddess costumes for you to choose from this Halloween!

Perhaps one of the lesser known Greek Goddesses, Hestia was one of the original Olympians, but gave up her seat on Mount Olympus for Dionysus, God of Wine. She is the Goddess of the hearth, architecture, family, the state, and domesticity. Romans knew her as Vesta. In Ancient Greece, she was an important figure, and received the first offering during household sacrifices. Her priestesses were, like her, maidens, and in Roman times, were known as the Vestals. They tended to the goddess’ sacred fire and had a privileged status; for instance, they had a place of honour at games and events.

Aphrodite, whom the Romans called Venus, is the Goddess of love, although, like many Gods and Goddesses, she was also worshiped for other things. For instance, because she was born from sea foam, she was also known as a sea goddess, and in some places, she was even considered a goddess of war. Get some weapons for your costume! She served as a source of inspiration for many artists and is the central subject of several world-famous paintings and sculptures. Zeus married her off to Hephaestus, the lame god of forges and fire, but also she also has children with Ares, the god of war. One of those children was Eros, who also became a god of love.

People often think of Hera as a jealous goddess; the goddess of marriage and wife of Zeus, she is notably cruel to her unfaithful husband’s many conquests. Did you know that Hera (or Juno for the Romans) is also called “The Queen of Olympus” not only because she rules alongside Zeus, but also because according to some, she is much older than Zeus and ruled Olympus before him? This makes her a great inspiration for your Greek Goddess costume!

Athena is the Greek Goddess of war, wisdom, civilization, law and justice, the arts, mathematics, the crafts, and many other things. You might also know her as a protector of cities, and particularly of Athens—she won the patronage of the city in a contest against Poseidon, after inventing the olive tree. She is also the goddess of heroes, and, according to the legend, she was a mentor to heroes like Odysseus, Heracles, and Perseus. Athena is not only an inspiring goddess, but also a popular one, which means she’s a great inspiration for your Greek Goddess Costume! 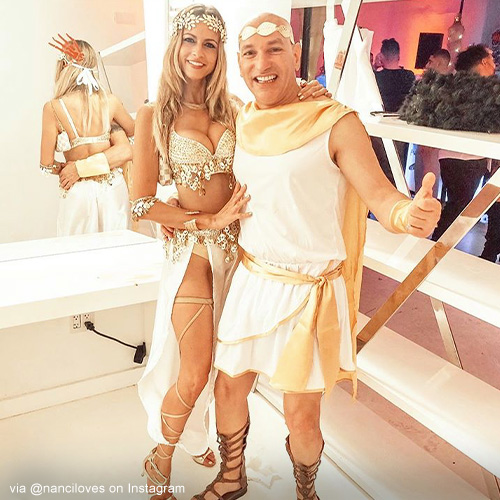 Demeter is a mother-goddess, whom the Romans know as Ceres. She is the Greek Goddess of the harvest, growth, and nourishment, but also of the circle of life and death. Like Aphrodite, she is also a goddess of fertility, and like Hera, she accompanies women during important steps of their lives. She is a powerful goddess, whom some associate with the constellation Virgo the Virgin. She is, however, not one of the maiden goddesses, and has several children, the most famous of which is her daughter Persephone.

Persephone’s story is a sad one. Hades, the Lord of the Underworld, abducted her, wanting to her his wife. Persephone (or Proserpina for the Romans), the daughter of Demeter and Zeus, was picking flowers with the Oceanids and Artemis and Athena when Hades burst out of the ground and took her to the Underworld to be his wife. Demeter, distraught at the loss of her daughter, roamed the earth aimlessly, her grief pushing her to neglect her duties as goddess of the harvest and leave the earth barren until Helios, one of the sun gods, told her what had happened. Zeus then sent Hermes, the messenger god, to get her back from Hades.

Hades agreed, but before letting his wife go, the god of Death tricked Persephone into eating some pomegranate seeds, which bound to him for a third of the year, and means she must stay in the Underworld for that time. Her return to earth marks the return of spring, and, as Demeter’s daughter, she is a goddess of new life and fertility. As the wife of Hades, she is also the Queen of the Underworld, and a goddess of death. Would you wear a Greek Goddess costume inspired by Persephone?

Can’t decide between a witch costume and a Greek goddess costume? Hecate is the goddess of cross-roads, magic, necromancy, ghosts, knowledge of herbs and witchcraft; and, because of that, some modern day pagans and wiccans still worship her. Like Helios, she assisted Demeter in her quest for her missing daughter. Like Artemis, she is a moon goddess, and, though some conflate her with the goddess of the hunt, she is a very powerful goddess in her own right.

Fans of the popular YA book series Percy Jackson might remember Iris as the goddess of the rainbow. Like Hermes, she is a messenger goddess, as well as Hera’s personal messenger. Consequently, people often represent her the same way as Hermes, with winged sandals. Some describe her not only as a goddess, but also as a literal incarnation of the rainbow. Therefore, a Greek Goddess costume inspired by Iris could also be a great rainbow or pride costume!

We know Nike, or Victoria for the Romans, as the Greek Goddess of speed, strength, and victory. Artists often represent her with wings, and she would be a great inspiration for your costume!

What's your favourite Greek goddess costume idea? There are so many inspiring goddesses! Check out our selection for more.